Innovative thinkers from across the world will go head to head

It was a hot gust of air that got Yosi Romano thinking about his next creation. The Israeli inventor was walking his young daughter along a busy high street in North London when a puff of exhaust smoke from an idling car enveloped them both.

"I thought, this is bad for me, but it's even worse for kids in prams who are at the level of the exhaust pipe," Romano said. He got in touch with his brother, a biochemist, who laid out in stark detail the composition of the fumes they breathed in that day. Romano decided something had to be done. Two years later, Romano is raising funds for his new company, Brizi, which has developed a device that creates a shield of clean air inside a pram, protecting infants from pollution.

On Thursday evening, Brizi came a step closer to securing vital funding when it impressed the judges at the Seed Award, a new tech competition run by Guangzhou-based real estate company Seedland Group. The awards held a regional semifinal for Europe-based startups in London last week. Ten companies pitched their ideas to a panel of experts from the tech world. Brizi advanced with two other United Kingdom-based works; biotechnology company Ameryz Bio and Wootzano, a manufacturer of an electronic skin that allows robots to feel.

They will join six other startups from the United States and Asia at the Seed Award final in China later this year. The winner will take home 1 million yuan ($140,000). Three runners-up are set to receive 200,000 yuan each. Seedland Group announced the competition in May and put on events at Peking University in China, Oxford University in the UK and Stanford University in the US.

Founded in 2006, Seedland Group started out as a property development company. It has since expanded into the field of smart home technology.

"People ask me: why us? I say, why not us? We have the genes of technology and innovation in our business," said K.K. Ng, chief marketing officer of Seedland Group and chairwoman of the Seed Award.

"When we went to Silicon Valley and to those universities, they didn't know us. Even in China we keep a low profile. But once we communicated what the Seed Award is and what we wanted to do, everyone got excited."

Over 1,300 works applied to take part in the inaugural competition this year. Two other regional semifinals were held in Guangzhou and San Francisco over the summer.

Ng said the selected teams come from numerous industries, but share one common objective - the development of a technology that will improve everyday life. "We are generally looking for projects that are pre-angels," said Ng. "We are not looking at profits. We are looking at the human beings, the creators themselves, as well as the technology. We want to connect people and give people the opportunity to realize great ideas."

Brizi and its UK counterparts will be up against stiff competition at the final in China. US-based aerospace team Ampaire will pitch the promise of an all-electric commuter aircraft. Israeli project My Cell Therapeutics said it can produce 3D-printed hearts for transplant patients. A team of bioengineering students graduated from Tsinghua University will showcase Pinpoint, a robot that claim can perform lung biopsies with great accuracy.

Other companies will display robots that can clear sewers, nanomaterials with the ability to touch and feel as human skin does and a headset that provides drug-free chronic pain relief by stimulating the brain through light and sound impulses.

Lee Mun Ching, leader of Ameryz Bio, said that beyond the cash prize the opportunity to make contacts in China is invaluable. She will be pitching a new device that uses blood samples to detect cancer at point of care. "I was initially hesitant to participate, because we are such a young project and the competition in the awards is so strong. But the organizers were supportive and encouraging," lee said. "Going to China will enable us to meet other visionary leaders, it will be great for contacts and might open doors for collaborations. China is a big market for cancer detection."

Romano agrees. His project has links to China - parts of the Brizi device are manufactured there - and he's keen to gain further exposure in the country. "It's much more than money, it's about the sheer size of China and its influence in the world. It's an opportunity for public relations, to be exposed to new markets and learn about them," Romano said. "But beyond that, there is a great correlation between the goals of this award and what we are doing," he added. "If you are trying to develop scientific research and it doesn't apply to people's lives, it stays in the lab. Creating a better environment for future generations and enhancing the surroundings we live in is something that I find very important." 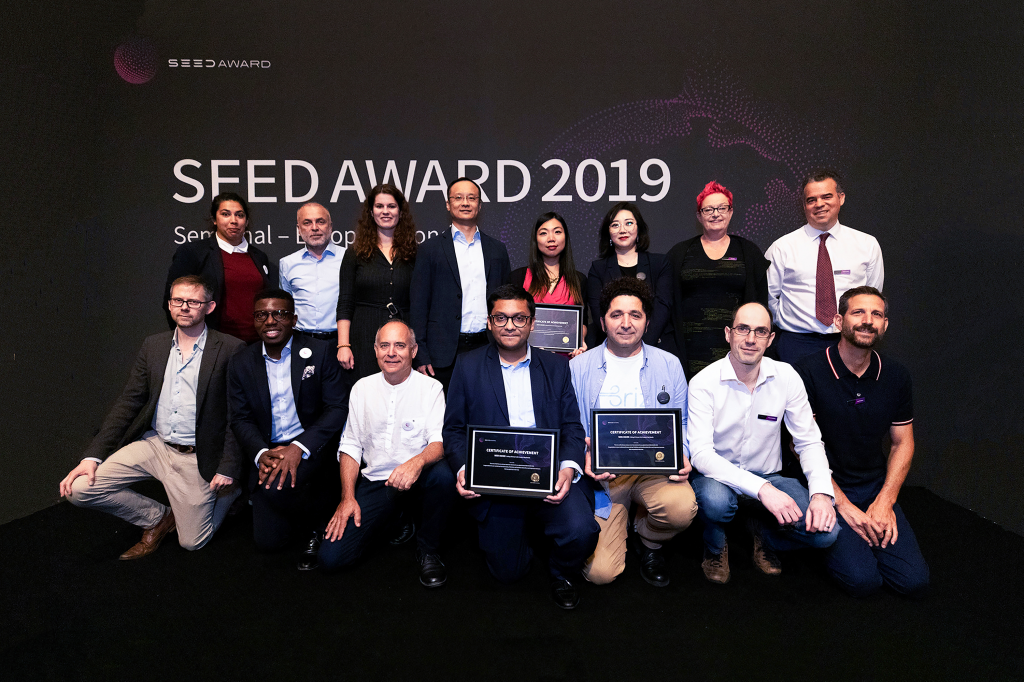 About SEEDLAND Our Vision Our Awards Brand Culture